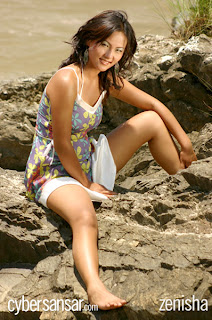 So it boils down to this. The Maoists female organizations and some other stupid associations demand that The Miss Nepal Contest be canceled. Disapproving of this immature and idiotic demand, when Hidden Treasure refuses and tries to hold the contest, those fools go over to Dabur and try to shut it down. Dabur is forced to cancel it's corporate support for the competition.

Now, when Hidden Treasure tries to organize the contest in an Army Theatre - the government tells them to cancel the program at the last minute. Think what they say - "We can't provide you security if anything untoward befalls". What the fuck? Didn't we just hear from the Home Minister that everything is safe now that he's the Home Minister? Or was it just a publicity stunt? The controversies surrounding this competition has shown how the Maoists will now go on.

Women pull other women's feet and deny them the success they're supposed to get. We've had to see a lot of soap operas in which mothers-in-law, and daughter-in-law would fight with each other. Now, wee see it live. Ugly women trying to put an end to a competition that rewards beauties with brains. Go and do some fucking plastic surgeries you idiots, if you can't see others getting name and fame for being beautiful.

There's this porn video in which I'm linked up with as somebody else. And the one who created it is now trying to pass it on to the mass. Even The Hidden Treasure received a threatening call that told them to cancel the beauty pageant or that video will be screened in front of everyone during the finale. I've personally watched that video, and it's in a blurred format. The similarity between the girl who plays in that video and me is we both have chinky eyes and look Mongolian. She's way thinner than me. The Hidden Treasure and I are trying our best to find out the person behind such sick mentality. I must say, whoever did that is really pathetic. S/he must've had nothing better to do than to tarnish someone's reputation. Reputation and self-respect to any woman are very sensitive issues. It's very wrong to use somebody's name and make a product out of it. Women have a very thin line for crossing the limits, and such acts are really humiliating. If the one who made that fake porn video is reading this today, I want to ask him what if that had happened to your own mother or sister. I wonder if you would find entertainment in it! If it was a personal grudge or any sort of revenge, then have the guts to face me.